This is the story of yesterday starting like any other paddling Saturday and ending with me wearing Paul Reavley’s boxer shorts and jeans at a bar in Fairhaven.

When I arrived at Marine Park, we debated whether to do a downwinder or laps. It was calm along the shore and white-capping by the buoy, typical of a southeasterly wind. The general consensus was that the wind was dying. When Larry declined to join us on the downwinder, I made a joke that this was a rare moment when a paddler made a good decision. Words that would prove to be prophetic.

As we drove to the put-in, Chuckanut Bay looked flat. We resigned ourselves to a slow slog back, but at least it would be exercise. When we reached Wild Cat the wind was strong and the Bay was white capping. I had great rides with some nice linking down to Governor’s Point.  Chuckanut Bay had some chunky waves powered by the East wind. I didn’t have my usual power and got caught by a side wave and flipped. I never mind a huli early in a paddle as I remount and become more aggressive and not as concerned about going over. I get confidence by remounting in the conditions of the day.

Denise Week waited for me and we paddled side-by-side for a bit. The message was clear, we needed to work our way right and aim for the can off of Post Point.  I would catch a couple of waves that took me East, but the majority of the waves had a different idea and pushed me West.  Later, Denise mentioned she saw me and then I was gone. She wasn’t sure if I was ahead, behind, East or West.  She did what I would have done and headed on a course to Marine Park.

I, however, was going further and further West. At first I thought maybe I could make Squalicum. Then the cement factory.  When I realized I wasn’t even going to be inside the moored freighters, I was focused on just reaching land, whatever land was in front of me.

As I got further North the waves became choppy and bigger and bigger.  We had passed a few logs earlier but now they were everywhere.  I crested one wave to see I was headed toward the root system of an upended tree. I yelled to myself, “You’ve got to be kidding”.  I was wallowing and then speeding forward and wallowing again as I dodged the 3-foot-high web of roots.

In these conditions, I was alternating between hulis and maneuvering around wood. Almost every time I went in the stern leash was either wrapped around the stern or the rudder. I would move to the back of the boat and untangle the leash. Every huli my marine radio fell out of my PDF’s pocket. During at least three of my hulis my radio leash wrapped around my stern leash, further complicating remounting the boat and extending my time in the water. I tried stuffing my radio back into my vest pocket, but that became more difficult as time went on. On two remounts I landed sitting on my radio. I was unsuccessful at reaching down and shifting my weight to remove the radio.  Back into the water. On some remounts the radio would be under my thigh, taking away any leg drive I could muster.

Another complication was the plug in the stern.  During almost every huli the plug was ripped out of the hole. It added yet another water-logged, time-consuming chore to push the plug back into place.  During one remounting attempt, I couldn’t quite reach the bucket and I looked back and the leash was hung up on the plug. I tried kicking the leash but it wouldn’t release. Back to the end of the boat to untangle the leash and secure the plug.

During one of my brief paddling segments I spotted a 20-foot-long, 18-inch-in-diameter, log ahead and perpendicular to the boat. The sucker looked like it was moving East and we were on a collision course. Having recently been T-boned, I had no interest in repeating that experience. I went into the bay before the log could hit me. Gently the bow of the boat went up on the log. Then I had to get the boat off the log and get far enough away that the boat didn’t get hurt. The wind was my friend, as I angled the stern to catch a gust and I pushed and swam the boat off the log. Once off I still had to get enough distance away from the log so the waves wouldn’t crash us together. This was time-consuming.

At this point you might be wondering how big the waves were: These waves rivaled the largest waves I had been in the Gorge, but were more confused and filled with large debris. It was strange. I had been out in much bigger winds, but never waves this big on the Bay.

Once I was done with that heat-seeking missile of a log, my legs became difficult to move. After a remount, I would keep my legs out and paddle for a bit before bringing them in. Then I reached a point where it was nearly impossible to lift my legs out of the water. They didn’t hurt. They didn’t feel particularly cold. They were numb and unresponsive.

This was getting serious. My vision of reaching shore, or paddling back to Squalicum was out of reach and laughable. Next time I did a huli, I hit the DSC distress button. I could see that the display on the radio changed, but without my readers, I couldn’t tell if I had successfully sent out the alarm. I had gloves on and I could lift the button protector easily enough, but the underlying button is small and recessed. I could feel my arms starting to go and I didn’t want to remove my gloves. I hit the signal again and I heard a noise. That was a good sign, but my radio has lots of buttons. I wasn’t 100% sure that I had been successful in sending the call for help.

I managed my last remount (probably #7 or #8) somehow getting my right leg over the bucket and into the water. I was comically slapping the water. My poggies, which I had over my gloves, were on the throats of my paddle submerging with the blade, interfering with any propulsion I might have gotten from my feeble stroke. This is when I realized my cognition was starting to go. I thought how funny it would be to see drone footage of me paddling like this, but at the same time that stroke was what was going to save me.

I went over for the last time. My arms and legs were now too useless to remount. Things were becoming a bit foggy. Somehow I managed to get my chest up over the bucket and I looked over at the familiar site of Bellingham and thought, “huh, so this could be it”.  I am not hurt, not cold, just inert. This is too easy a way to go. I hit the DSC again as I had been hitting it on successive flips.

I can’t tell you how long I was laying over my boat, or how long I was actually in the water before I heard: “Sir, we are going to throw you a rope. Grab it and we will pull you over.” The throw was perfect and landed across my shoulder; all I had to do was circle my forearm and they had a secure hold.

The next thing I knew I was thrown onto the deck like a tuna. “Sir, this is going to be a bumpy ride,” one of the rescuers shouted. I thought there were eight or 10 hands on me, holding me down and covering me with blankets.

Now I was cold. Every muscle shivered and my teeth were chattering uncontrollably. I couldn’t see what was happening, but when we docked, it felt like they threw me in a  sack and carried me up the gangplank. They put me down, cut off all my gear, and wrapped me in dry blankets. Or maybe the EMTs did that. I don’t know. 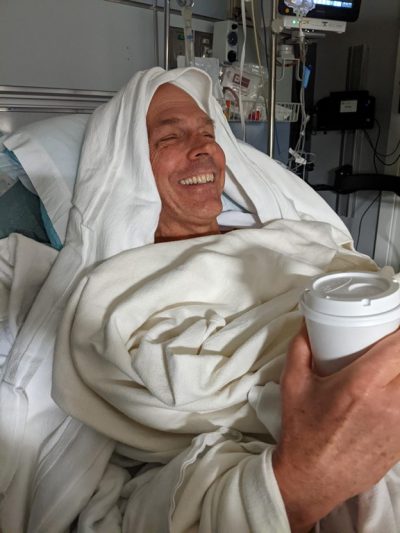 I have no memory of the EMTs moving me to the ambulance. The only thing I remember is seeing a branch outside the ambulance window that was eerily similar to the branch clicking on the window in one of my favorite movies of my youth, Doctor Zhivago.

I must have gone out for a bit because the next thing I remember was Neil saying he was glad to see me. I was in the ER at PeaceHealth, with an IV, an amazing heating system for hyperthermic patients, EKG electrodes taped to my chest, and a parade of techs, nurses, doctors, and friends. They had wrapped me head to toe in white blankets, basically the costume of Peter O’Toole, in another favorite movie of my youth, Lawrence of Arabia. Okay, I hope I am not doing a Benjamin Button here.

After all my tests were completed, my core temp was back and my cognition was as good as it gets,  I was cleared to go.

My wife, Bev, had just flown in from a trip, drove straight from the airport and picked me up. We went to the Coast Guard station to meet the crew that saved me and to pick up what was left of my gear. Turns out there were only three guys on that boat and I was much larger than all of them. They handled me like I weighed nothing.

They gave me a tour of the boat and the room where they put me before the EMTs took over and explained; “Sir we had a choice: save you or save the boat.” They also explained how they got to me: They had two distress calls in the same area. They went close to where I had sent my first call and found an unmoored sailboat with no one onboard. Then they went to the exact location of my first call and I was nowhere in sight.  They keep getting distress calls that laid a path directly to me. 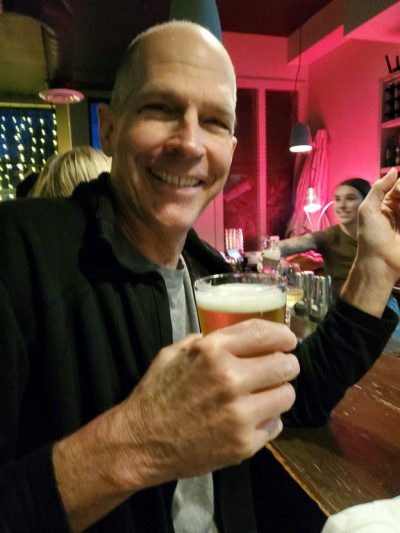 Bev and I thanked them profusely for what they had done and we headed to Fairhaven at around 5 pm. I had eaten a banana at 7:30 am and nothing else. We went into a bar to eat and catch up, me nattily dressed in Paul Reavley’s clothes that he had kindly brought to the hospital. I may have been wearing Paul’s clothes, but Denise provided the support I needed. I don’t think she left the ER the entire time I was there, coordinating calls, helping me make sense of next steps when I didn’t have all my senses, and providing cheerful companionship. Denise is emblematic of the paddling community. I was overwhelmed by the actions, kindness, and concern I received through too many communication channels to keep up with in a timely fashion.

Thank you all. I am proud and lucky to be part of this ragtag group of amazing people.

These are my personal safety takeaways from Saturday’s ordeal. I am no safety expert and this is by no means an exhaustive checklist.   I offer them to continue the conversation of paddling safely on the bay. 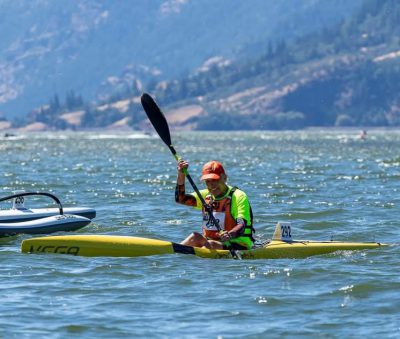 About the Author: guest